TO FLY, YOU NEED BIG WINGS

Jesus what did you do?!?

I had the tattoo done, that’s what I did. And it’s definitely not the most extreme thing in life I’ve thrown a bunch of money at. For now.

But let’s start at the beginning.

I first heard about Žvaki and Anubis tattoo studio about 10 years ago, when the studio just opened. I was walking along the promenade and came across a hanging sign on the building where the studio was located. I liked the name right away, so I decided to come in, just to see what it was about, what the people were like, what they had to offer and to inquire about buying piercings.

The way the space was arranged (paintings, hung works), the people that worked then (Žvaki and his girlfriend, today his wife; Kiki who was in training for a tattoo artist and the boy who received customers at the so-called “counter”) and the energy and friendly approach immediately attracted me.

There weren’t many tattoo parlors in Osijek at that time, so the alternative team, which differed from the others in piercings and tattoos, treated each other like old friends anyway.

"Maja, the skin is not a paper"

“Maja, the skin is not a paper. I understand that you like details, but if you want to tattoo something like that, either reduce the details or enlarge the motif”.

Another thing I liked about Žvaki’s approach is that he calls a good idea a good idea, and he simply says cretinism is cretinism.

You won’t get bullshit or fake promises from him.

So I actually chose Anubis studio a long time ago and primarily because of the friendly and open approach. I created a certain loyalty to it and did not go to other salons. 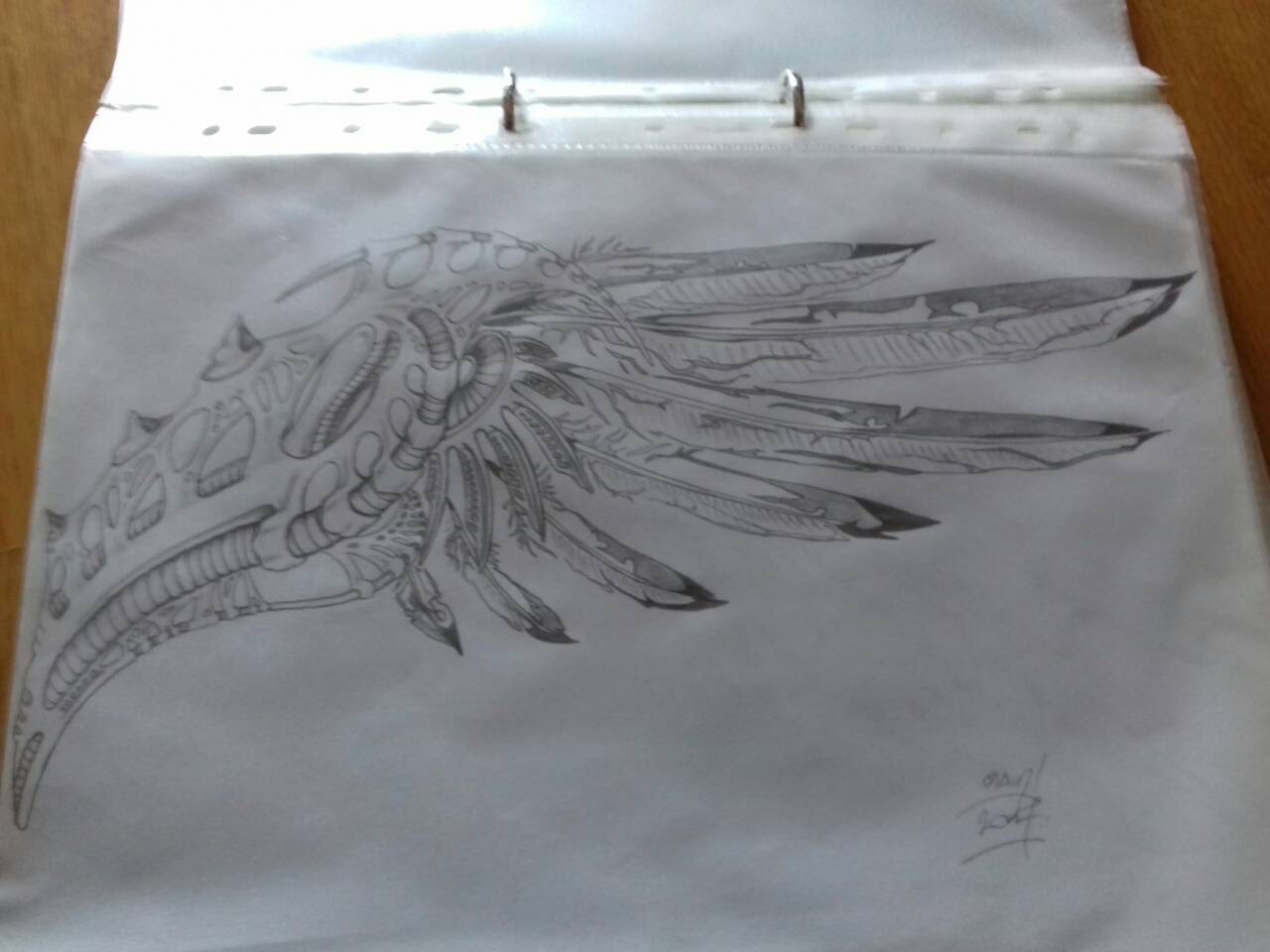 Fulfillment of my childhood dream

You know that thing you’ve wanted since you were little, you literally dream about it and it doesn’t subside even when you stopped being a kid a long time ago?

To me, it was owning a horse. I made my dream come true, but it didn’t turn out quite as I expected. I learned a lesson about being careful what I want (or I didn’t?), I realized something about myself, and rested for a couple of years, planning on how to realize another life dream.

(So ​​much for me learning about being careful what you want. HA.)

And what it was about?

Ever since I was a child, I wanted to have wings. Even today, I sometimes dream of flying.

Now… Since humans are not beings that are compatible with having real wings in any sustainable form, the only logical step was – getting a tattoo.

For three years I planned and reconsidered whether I would go for the realization of that or not, for three years the answer was and remained invariably positive. Symbolism, motif, location, everything already determined.

A few microdermals, one bigger life lesson and a couple of smaller tattoos later, here we are in 2019. In the meantime, I even removed moles from my back to prepare for the tattoo, because they would certainly get in the way.

And that’s not all.

I made my own sketch, that is, a wing motif. I saved a certain amount of money that I thought should cover work of that size (spoiler alert – it wasn’t enough for even half) and decided to see if Žvaki and his Anubis studio were still in business.

Anubis was still at the same place, even though I hadn’t passed there for six years. What I didn’t know was that the location and owner were the only things that hadn’t changed.

I called, introduced myself, said what I was planning. Žvaki tells me that he has changed his approach to tattooing and that before each tattoo he tells everyone that they need to do an education class, and only then, based on that, we can move on.

What the fuck? What education? I already have three tattoos, I make my own motifs, what do I have to educate myself about? I know how it goes – drawing, needle, paint and work done. I even made it easier for him because I had been making my own motif for months, so he won’t have to waste his time thinking.

We agreed on a date for that education (whatever it was) and I came thinking we will sit down for a while, talk about who was who and what is new, make fun of each other and then the tattooing will start. what else could it be? We have known each other for a long time and I am not new to the procedure.

And then a surprise…

Dude, I don’t have anything, I don’t know anything.

I walked out of the building with an upset face, chaos in my head, and one question: what the fuck just happened?

Despite everything, I decided to realize the wing project and I had no intention of giving up. At the first appointment, I brought my motif and stated that I wanted to tattoo it. We can discuss the size, but I don’t want it to be too huge. Colors – black / white, and what’s more there to discuss, right?

Žvaki and I literally fought over motives and in the end I had to give up everything I imagined.

After showing me for three hours in a computer program how that motif would look in different sizes, given my build and location on the body, I had to face the fact that everything I imagined just couldn’t work out.

Considering the fact that I fucking struggled so hard to make that drawing, and that in my had I already had it done – the realization that all my effort and all my expectations will go down the drain…

Well, let’s put it this way – I fought with every cell in my body to save it. I wanted so badly to make this MY project, that there was ME in the drawing, that Žvaki with a tattooing machine is just a tool that would transfer MY ideas to MY skin… and now I would have to simply give it all up?? OH HELL NO! 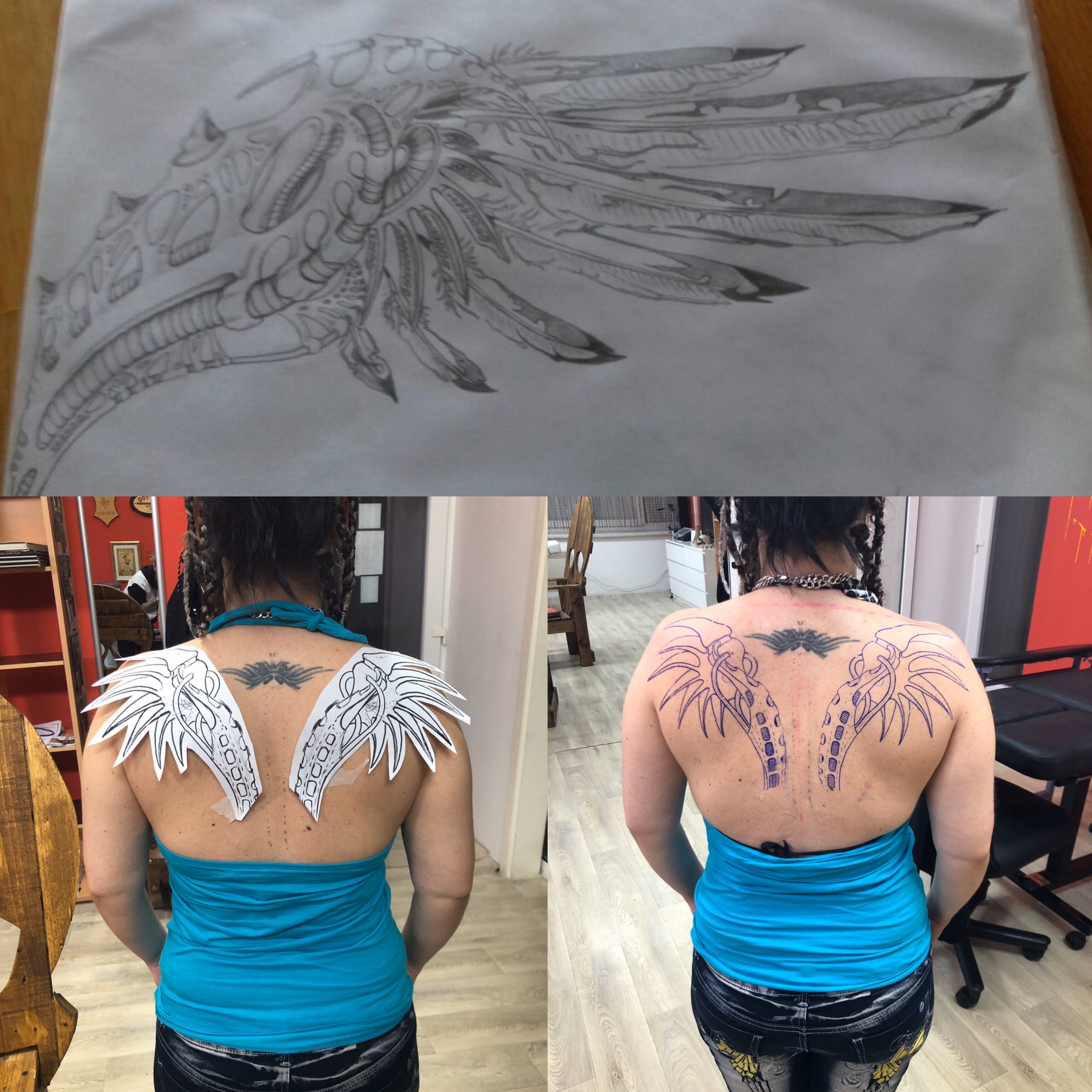 In good faith Žvaki constantly repeats “together we will create something that suits YOU as a person and your BODY”, but it was obvious he is fed up with arguing with me.

We weren’t progressing, we were stumbling in one spot because I was stubborn. We weren’t getting anywhere unless I got a little bit more flexible, and most importantly – I will lose the money I paid for this appointment if I don’t start cooperating.

The most important question: if we are not going to use my sketch, how many ME will be in my tattoo at all? I don’t want someone else’s vision on me. I want MY OWN! AND I DON’T WANT TO LOSE MY MONEY, I DIDN’T FIND IT IN THE STREET!!!

I looked up, sighed, and simply let go. What I wanted most, though, was those wings. 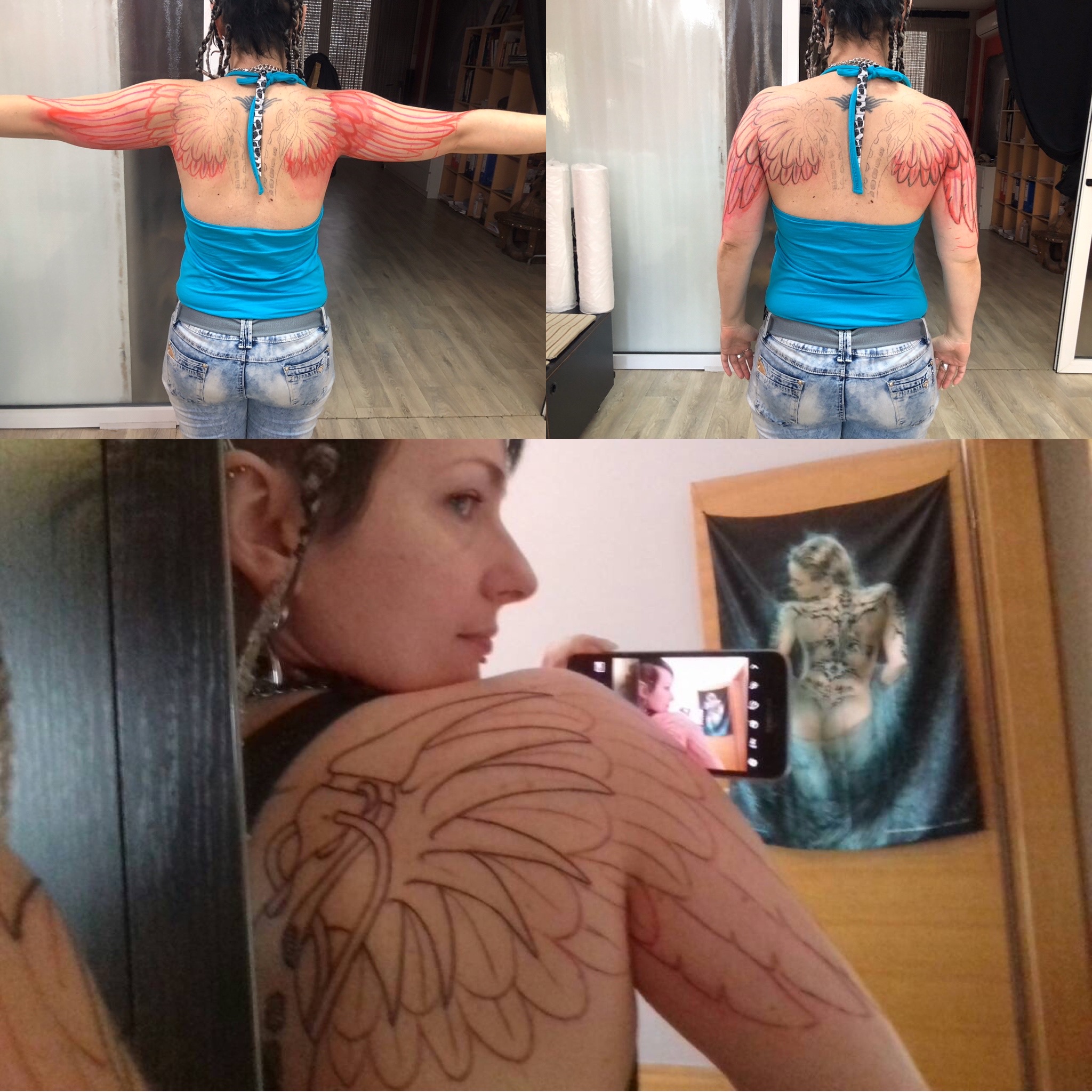 "You only did a sketch in eight hours???"

Then the ‘click’ in my head finally happened. We finally started to collaborate, and the drawing of the final project started, but not before Žvaki convinced me and gave his honorable (pioneering) word that we would use my sketch as a rough draft to make a REAL sketch out of it.

He drew a little, I drew a little. Remarks, additions, subtractions, drawing on the skin with colorful markers… 8 hours went by.

I came home without a tattoo, but satisfied; a little worried about my bank account and with my body colorful as a parrot.

My better half asks me how long he tattooed me, and to my answer “we didn’t start tattooing, we sketched the tattoo all the time and worked out the motif”, he just looked at me in bewilderment with the question of what the hell was there to sketch when I had already brought my picture.

He didn’t say anything more, but it was obvious that he thought I was naive and that Žvaki would deceive me and extort money from me.

“You just gave xxxx kunas to a guy to draw on you with a pen”. 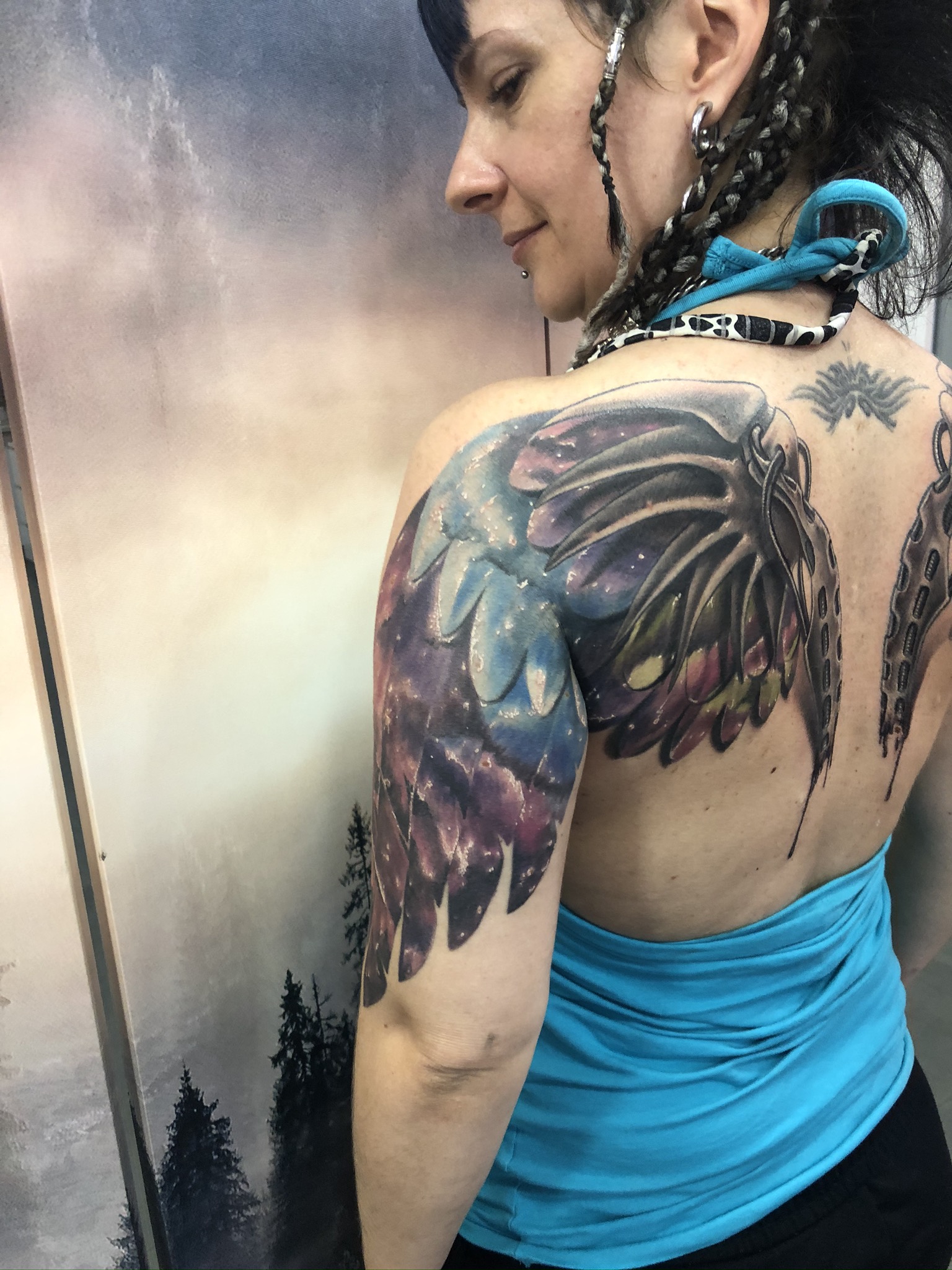 So proud of my wings

I won’t describe the whole procedure of the tattooing too much, because once we made the sketch and set the lines, things went smoothly.

The only unplanned hurdle happened because I didn’t eat enough before one appointment, so we had to schedule another one. But I was to blame for that.

After every new day spent in the studio I came home with more and more wings on my skin, the progress was obvious and the motive and the painting itself were perfectly executed.

In the end, I can say that these are MY wings, although I did not completely do the sketch myself as I originally wanted and which is why I was convinced that I would not consider them 100% my own.

Seeing the project completed, the better half was still dissatisfied with the amount of finances pumped into it all, but happy for me because it was obvious that I felt complete.

This summer, whenever we went somewhere together, he would walk a few meters behind me and proudly observe the reactions of people to my tattoo, and later happily recount them to me.

One morning, as I was wearing a sports shirt with open shoulders to work, he proudly shouted across half the apartment:

“WHO IS WEARING THEIR TATTOO TO WORK TODAY?”

Did I learn anything during this whole process?

I learned that I know nothing about anything – that’s what I learned!

And that I shouldn’t be so stubborn, for God’s sake.

I absolutely didn’t imagine that I would end up with this tattooed, because let’s repeat it once again – I brought MY VISION of a tattoo when I first came. And no, I’m not sorry, even though I shat myself when Žvaki roughly showed me how big it would be.

But who has ever heard of small wings for big flights? 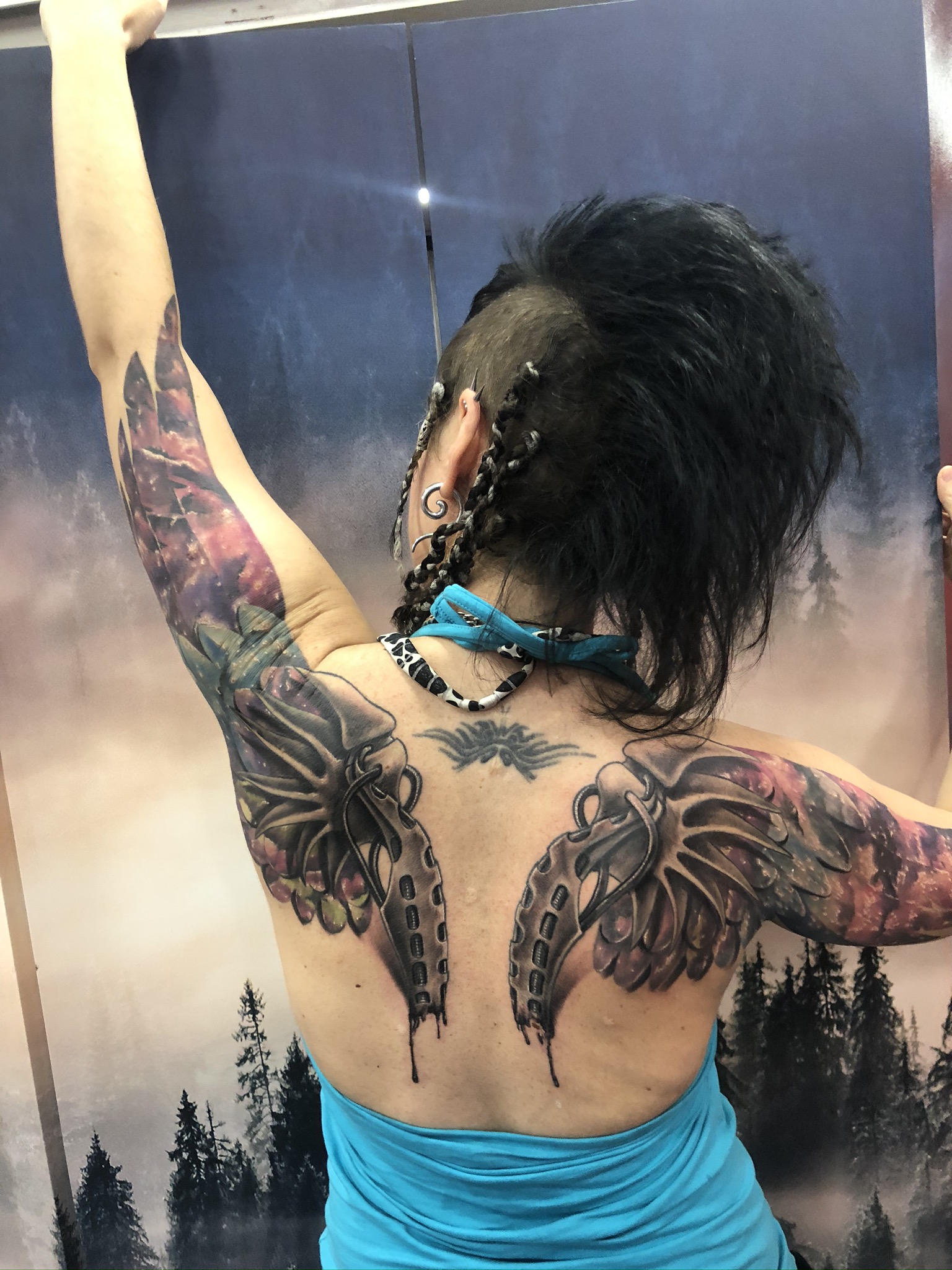 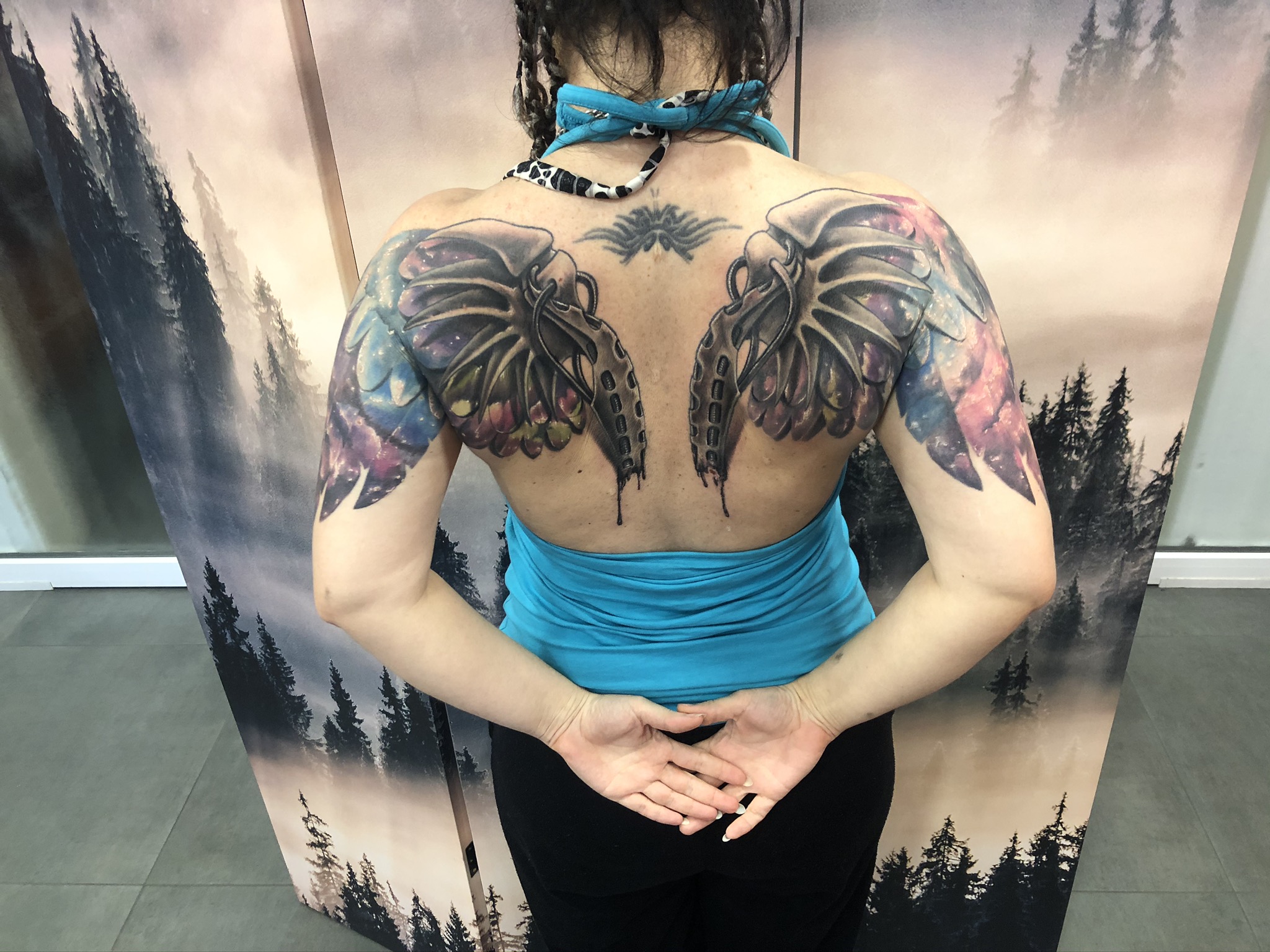 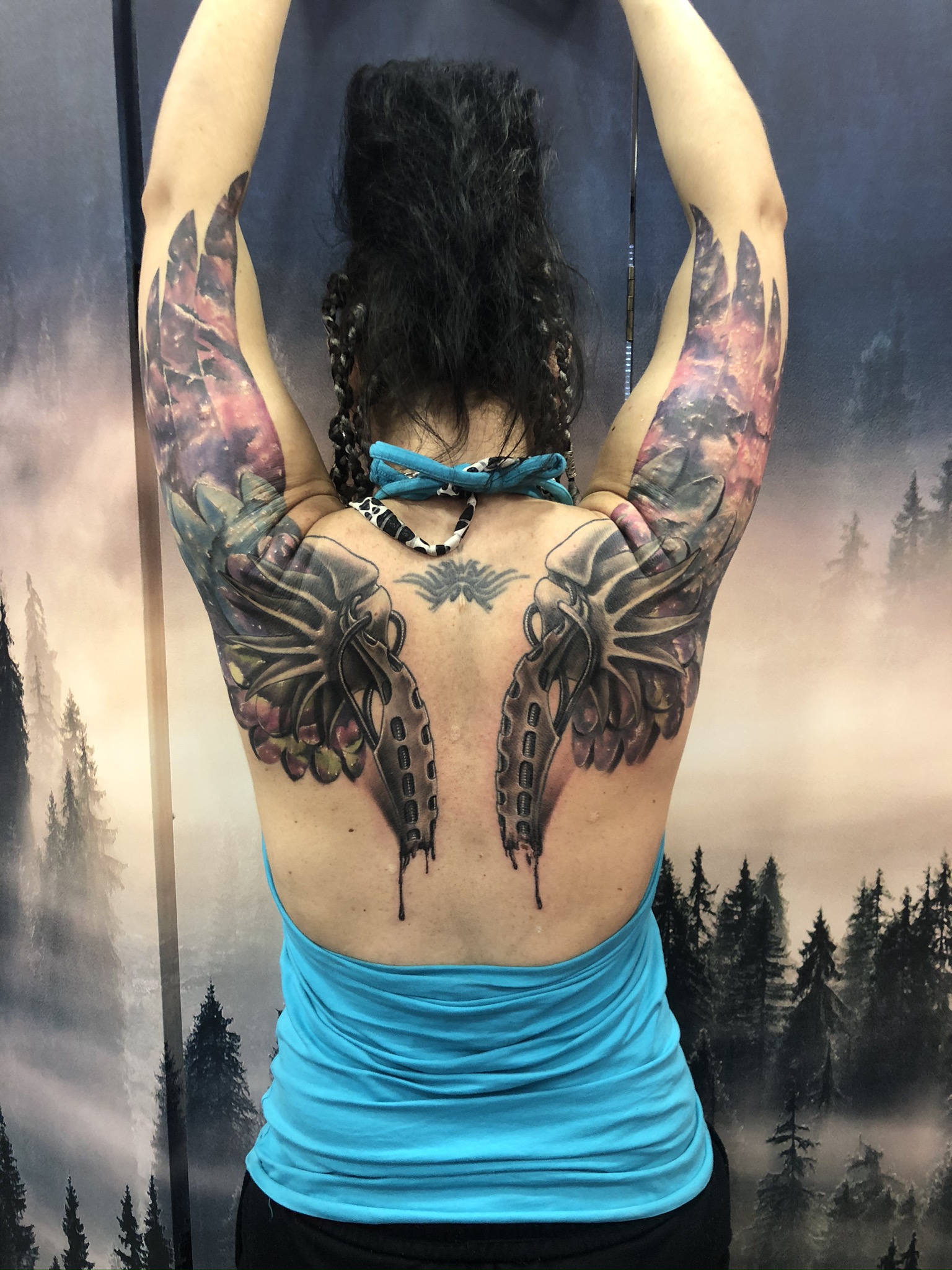 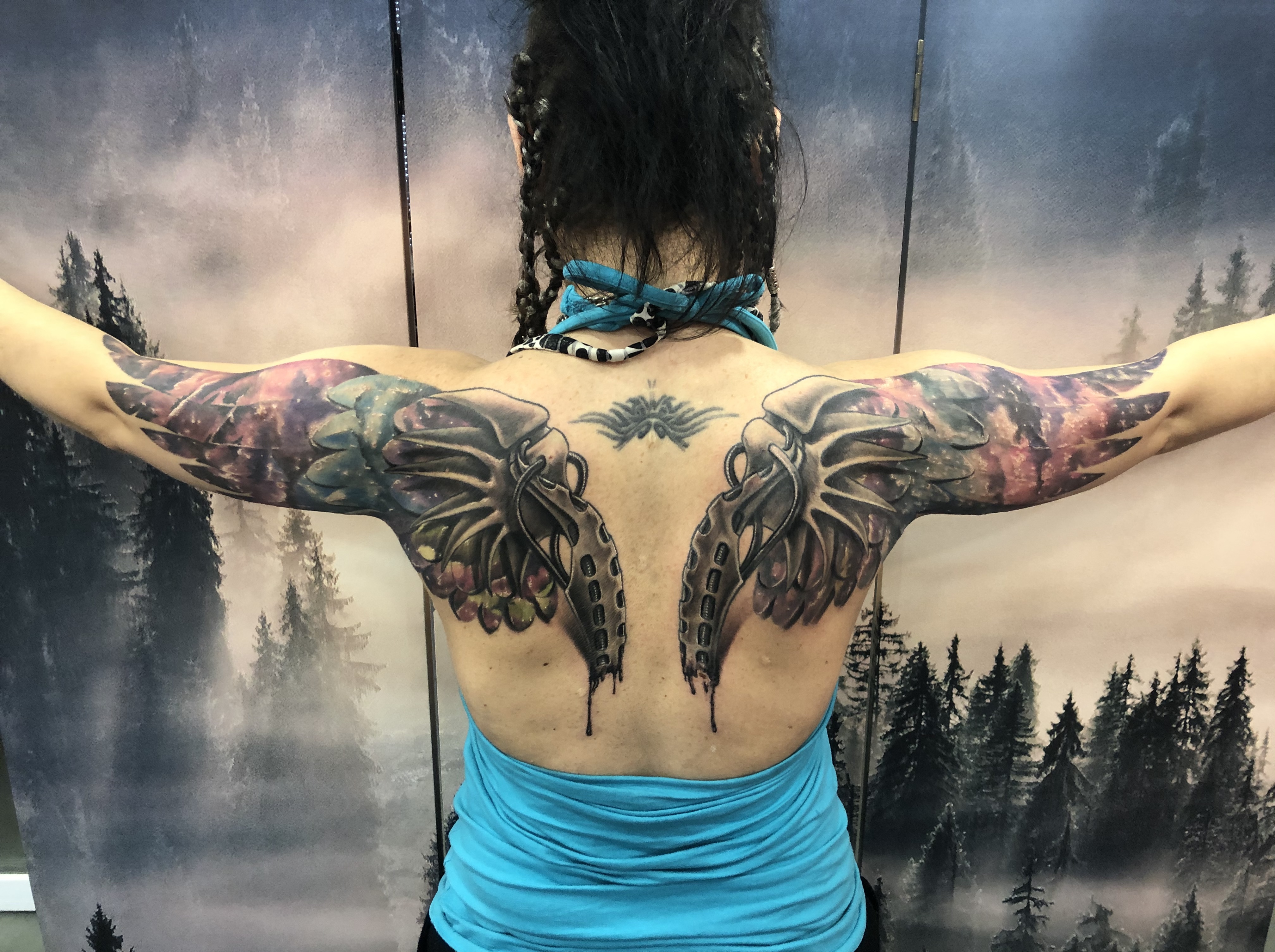